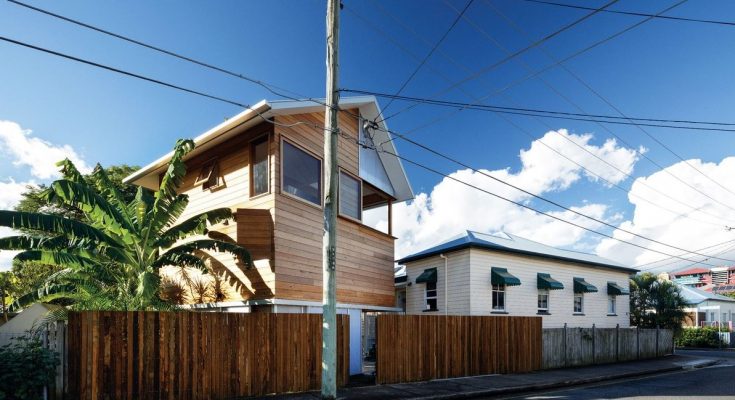 This detached extension to a Queenslander house challenges conventional models for alteration and addition projects with a design that oscillates between connectivity and autonomy.

This micro project tackles macro urban issues such as sprawl and over- population by reclaiming and reinventing small-scale spaces in the suburbs. The clients for One Room Tower, Antony Moulis and Silvia Micheli, are architectural designers, theorists and educators at the University of Queensland. For this project they were motivated by a series of personal circumstances that required an extension to their home, to cater for visiting family members who sometimes stay for months at a time. 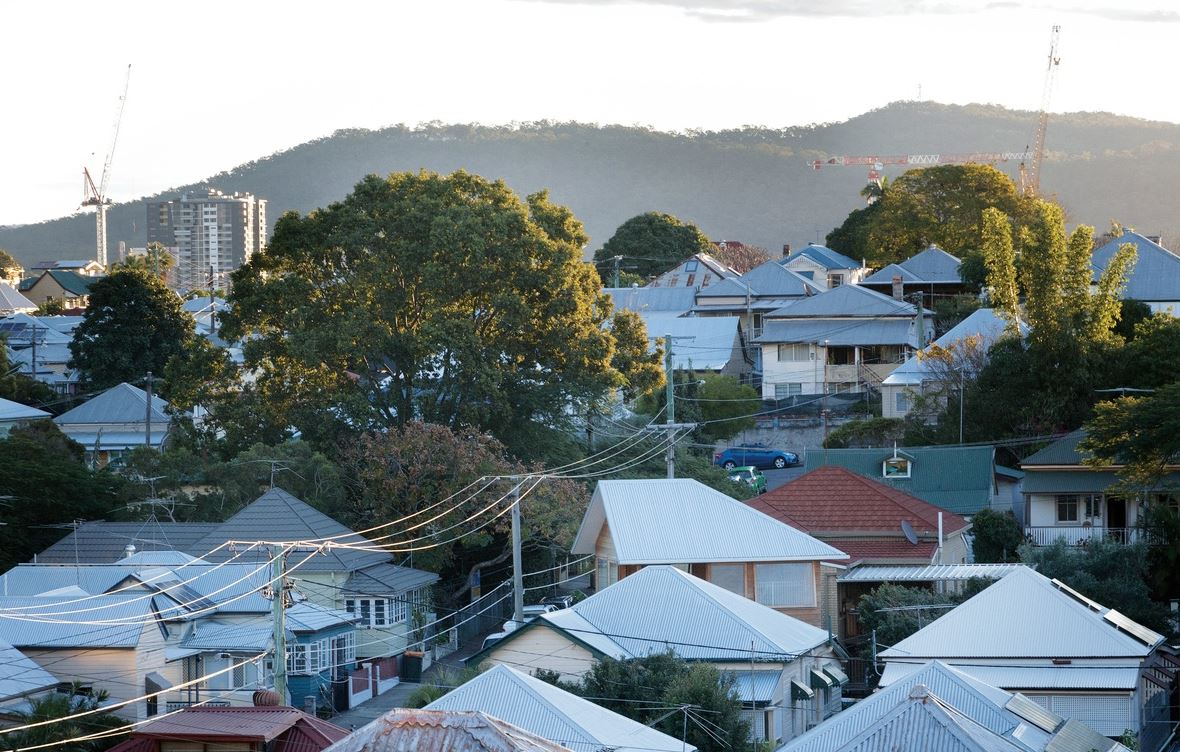 The couple set about sketching a series of options to investigate a feasible solution. Typical configurations for extensions often involve a “lift and infill” strategy or a rear addition, but the owners’ design ambitions ruled out these options. While the budget was restrictive, this constraint provided a unique opportunity. “We intended to build something inventive, something ‘explorative and special,’” Silvia explains. 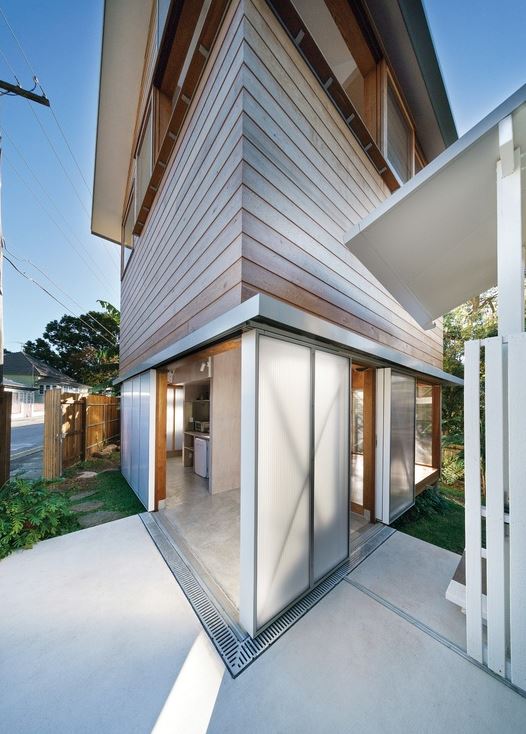 Mindful of the existing cellular quality of the rooms within their cottage, Antony and Silvia engaged Paul Hotston and Yohei Omura of Phorm Architecture and Design (see profile in Houses 113). “We were particularly drawn to the spatial effects, volumes and play of light in Phorm’s past projects,” says Silvia. “We visited the In-Between Room (see Houses 98) and the Taringa Tree House.” These two projects challenge conventions for house extensions by manipulating forms within tight site restrictions or intentionally testing how people live (comfortably) in small spaces. 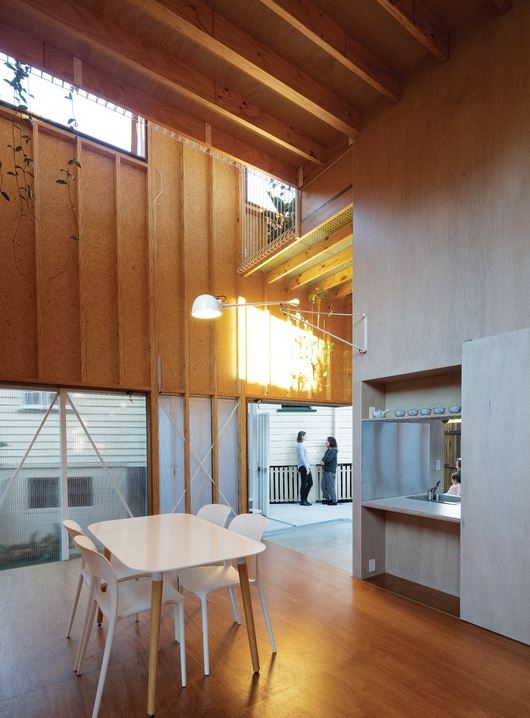 The architects and clients shared an interest in retaining the local timber-and-tin character of their neighbourhood and agreed on a detached extension to the Queenslander cottage. The underutilized backyard was quickly identified as an opportune site. The team collaborated to develop a simple brief that facilitated highly flexible social, eating, bathing and sleeping spaces. The resulting One Room Tower is a single volume that meets the maximum height restriction of 9.5 metres above ground level, while capitalizing on the spatial opportunities of the compact backyard. Both architects and clients were opposed to the conventional “lift and infill” strategy based on the tangible (and prolific) presence of imposing two-storey Queenslander renovations. 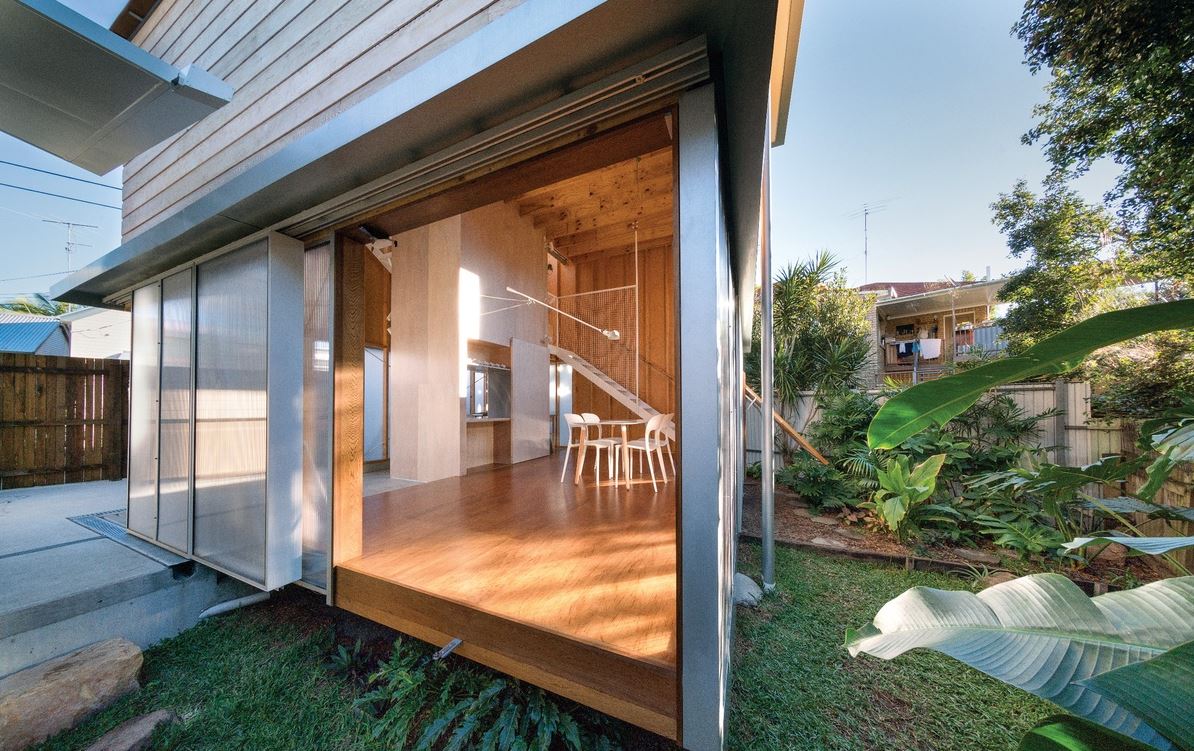 The tower is surprisingly unassuming. Externally, the form is aesthetically sympathetic to familiar characteristics within its setting; in particular, through the pitched roofline and horizontal cedar board cladding. The careful composition of the off-centre gable roof, translucent cladding and large sliding windows ensures the tower is undeniably contemporary and site-specific.

A strategic manoeuvre twists the tower off alignment with the surrounding street grid, establishing its presence as an autonomous structure. This ensures the original cottage remains untouched and belongs within its enclave. Instead of presenting a sheer wall to the street, the twist works to reduce the impact of the tower’s height over the surrounding cottages. This also creates four courtyard spaces at ground level: two landscaped courts to the rear, a play court for the children and a social court that mediates between the cottage, the tower and the street. 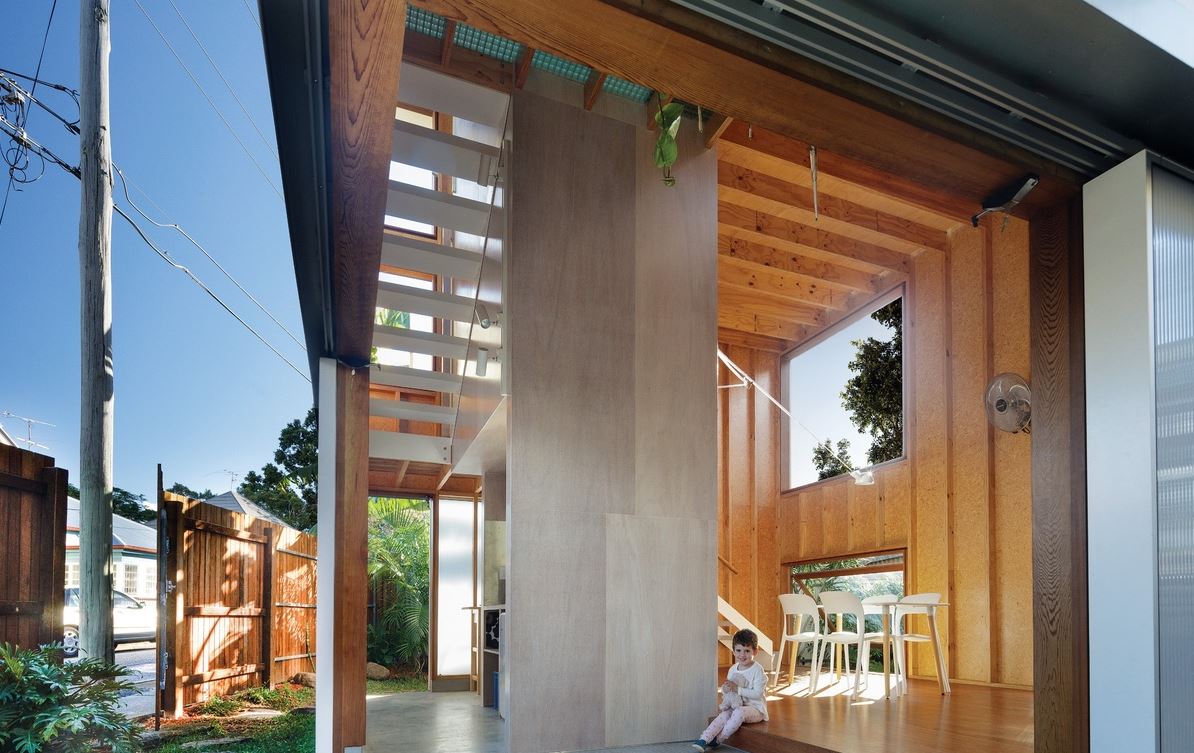 Arriving in the social court, either via a breezeway stair from the cottage or the concealed fence gate from the street, the court bleeds into the tower’s doma. As Yohei explains, “the doma is a traditional Japanese space, translating to ‘dirt floor,’ where shoes are removed before entering.” Here, the singular volume of the tower is revealed. With sparse furnishing, the solid element of the core, rising through the tower, is countered by a soaring light-filled void to the ceiling above. A sequence of spaces transitioning from public to private spirals upward, pivoting around the core. There are spaces within spaces, each defined by a change in height and material.

The structural core and frame operate in partnership to reinforce the tower’s volume. The core is the primary fixed element, containing the plumbing and electrical services. Nudged off-centre, the core generates spatial variation, serving each platform’s individual needs. This frees the spaces of furniture and facilitates countless modes of occupation. The tower becomes “a private residence for our parents, a quiet office, a playspace for our children, and a place for entertaining, from dinner parties to the pyjama variety,” says Silvia.

The tower is expertly assembled and incorporates smart detailing. The horizontal planes of the platforms join only at the vertical laminated veneer lumber frames, allowing light, air and sound to slip down the internal wall lining. The exposed vertical framing emphasizes the singular volume and draws the eye upward. The translucent industrial structural floor above the doma provides filtered light below and large cedar-framed windows slide back to draw the external spaces in. 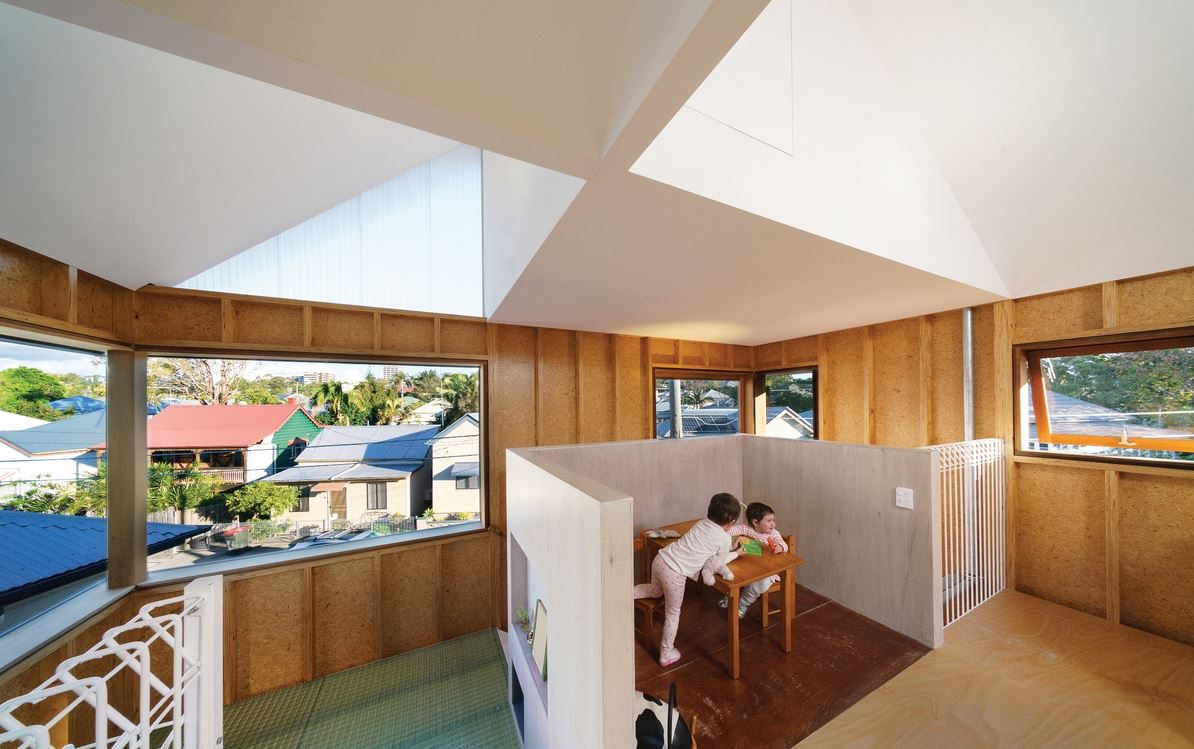 There are no rooms in the tower, just a single volume with defined spaces that borrow from one another and allow the family to remain connected. Budget is the mother of invention. The kitchenette is a simple module: the bathroom basin and mirror borrow the circulation space of the stair, which utilizes atypical (and inexpensive) materials such as pool fencing and cargo net as the balustrade.

Arriving at the upper platform under the varying quadrants of the coffered ceiling, the core terminates, facilitating sweeping views across the pyramid roofs of the neighbourhood and the city skyline beyond. Here, the viewer registers the dialogue between the tower and its context. One Room Tower is an inventive model for a house extension that preserves Brisbane’s timber-and-tin character, which is increasingly under threat from new builds. While sensitive to the evolving city fabric, the project is an intensely personal and beautiful response to the changing needs of Antony and Silvia’s family. 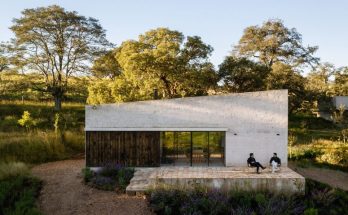 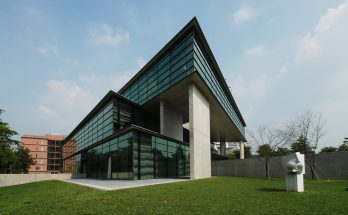 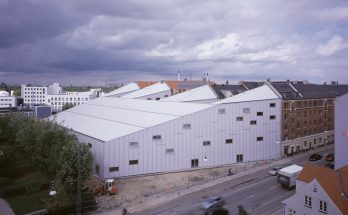